The grand plan for our tiny house was for it to move to central New Hampshire this summer.  I hired a professional transport company to move it because I was not comfortable moving it ourselves, and we boarded up all the doors and windows and packed everything inside so that it wouldn’t break or fall over.

Problem #1:     The transport company wanted us to be on the New Hampshire end of the trip so that they could get their final payment on delivery, so we happily left ahead of the tiny house and made our way to New Hampshire.  While spending the night in Washington, D.C., I got a call from the transport driver who was at our home trying to hook up the tiny house.  He informed me that the brakes did not work on the trailer.  Well, I knew that they had worked when it was delivered to our driveway over a year previously, so I called my trailer guy.  Daniel Glassco, my trailer guy, is amazing.  I just cannot say enough good things about his customer service.  He was out of town but told me he would drive through the night to meet the transport guy and figure out the brake problem.  It turns out that because the trailer had been sitting, the brake connector had rusted out.

Lesson learned:  When things sit outside for long periods of time, they rust or rot.  Everything needs to be checked out thoroughly before transport.  Even though this wasn’t a problem for us, I also learned that the tires can rot or become compromised due to moisture or UV rays. The transport company told me that they would not cover damaged incurred as a result of tire blowouts on compromised tires.

Problem #2:  With the brakes now safely connected and working, the transport driver hooked up and began to haul our tiny house…or not! His truck could not pull it! He told me that the way his truck was acting, he guessed my house to weigh 18-20,000 lbs.  My estimation of the finished weight was a little over 10,000 lbs!  Of course, when you are building something you have never built before, there is really not a great way to know the weight of the finished product, and we do not personally have a truck that can pull the house to a weigh station.  All of a sudden it became imperative to know how much this house weighs.  Thankfully, we found a friend with a big truck who took it to the weigh station for us (by this time we were in New Hampshire).  It weighed in at 13,080 lbs.  Great news!  I was slightly terrified by the transport guy’s estimation because there was no way that my axles could handle that kind of weight. Thankfully, the transport company said that they could send a driver with a heavier duty truck.

Lesson learned:  You really need to know the weight before you attempt to move the house a long distance.  That way you can accurately match the truck to the load. 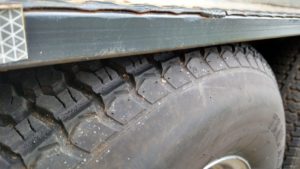 Problem #3:  The second transport driver came to pick up the tiny house.  As he was looking over the trailer, he noticed that there was not a lot of room between the tires and the edge of the fender wells. We had also noticed this and tried to grind down the edge so the tire would not rub it when going over bumps.  The transport guy took it upon himself to try to grind it down further and then headed out on the road keeping a careful eye on the tire situation.  He eventually pulled off close to Nashville and took it to a metal working shop that he knew about.  They looked at the trailer frame and told him that the trailer’s springs are compressed completely down so that the trailer is resting on the frame.  There is no cushion left, and because I had the trailer guy build the fenders as small as possible,the tires were actually rubbing a lot while in transit.  The transport guy wound up turning back around, and the end of the story is that the tiny house is back at our house, and I had to kiss my deposit with the transport company goodbye.  It turns out the tiny house was too heavy for the springs that we had, so if we want it to travel, we have to have heavier duty springs put on to raise the house higher.

Lesson learned:  Be careful when designing and ordering your trailer.  It is probably a good idea to figure on more weight than less as you are choosing your components.  My trailer was built well, but I was figuring everything based on a 10,000-12,000 lb. weight.  My axles can technically handle more than that, but the springs unfortunately could not.

The good news…all of these problems are fixable.  Meanwhile,  the tiny house is back up and running on Airbnb, and I am really getting used to having it around.  Right now the plan is still to travel to New Hampshire, but I am going to enjoy having it here for now.